The highlight of this tour is the spectacular Paro Tshechu. The visitors will experience age old traditions, nature at its best, magnificent mountain sights, sacred monasteries and temples and most importantly the religious masked dances. The mask dances are the highlight of the festival. Monks wearing majestically crafted mask and silk robes take the center and perform their meticulously choreographed religious dances with perfect coordination and synchronization thus blessing the spectators. The Tshechu concludes on the third day with the unfurling of a massive Thongdrel (religious appliqué scroll) of Guru Padmasambhava. A Thongdrel translates to liberation at sight meaning anyone laying an eye on the scroll will be liberated from negative karma of both the past and present lives. Apart from the religious significance, festivals are a time for social gathering and coming together of families and friends bound by same faith.


Trip at a Glance:


Day 1: Arrive at Paro International Airport and Drive to Thimphu

The landing and the taking off of the plane in itself is an amazing experience. As Bhutan is mountainous country the view of mount Jomolhari as the clouds disperse is a magical experience and especially if you are flying from New Delhi and Kathmandu to Paro, you can enjoy an amazing view of Mount Everest. You will need to manage a window seat on the left side of the plane on your flight to Paro. The whole landing experience is like a roller coaster ride on steroids. Once you land, your assigned tour guide and driver will pick up the visitors from the airport and drive to Thimphu city. It will be an hour drive to Thimphu from Paro Airport. After lunch, guests will explore Thimphu City and visit some of the most popular attractions

After breakfast, you will be taken around Thimphu city for sightseeing. You will visit popular attractions in Thimphu such as the Statue of Buddha Dordenma, located in Kuensel Phodrang at the top of a hill overlooking the city about 15 minutes drive from the main town. The statue is about 51.5 meters tall making it the tallest sitting statue of Buddha Shakyamuni. Other popular attractions include: The National Memorial Chorten which was built in the memory of the late 3rd king of Bhutan. You will also visit the Motithang Takin Preserve, Jungshi Traditional Paper Factory, Bhutan Postal Museum and many such exciting attractions.

En route to Paro, a quick stop at the Tachog Lhakhang to visit the Iron Chain Bridge built in the early 15th century by the great iron bridge builder and Poet – Yogi Thangtong Gyalpo (1385-1464). He is also known to have built the Dumtseg Lhakhang in Paro and many iron bridges throughout Bhutan and Tibet. The beautiful Paro valley is revered for a rich culture, picturesque landscape and tales of myths and legends. The valley is adorned with many ancient monasteries. The valley is often known as the gateway to the world and is home to the country’s only international airport.

After reaching, you will be led to your hotel and after lunch, you will be taken around the Paro town. Paro town is made of traditional Bhutanese houses aligned neatly together and the Paro River calmly flows just beside the town. Some of the major attractions you will visit are the; Paro Rinpung Dzong, The National Museum, Kyichu Lhakhang and you will also explore Paro town.

Paro Tshechu is considered the most popular among the tourists and draws thousands of crowds every year including both locals and foreigners. Locals dress in their finest textile rich attires bejeweled with priceless jewelries making the festival site even more grand and colorful. . The Tsechu is held on 10th day of the second lunar month. Paro Tshechu is held in the beautiful Rinpung Dzong. The masks dances are followed by traditional folk songs and the whole Paro valley comes to life with vibrant colors and the amazing energy of the festival spread across the valley is a must experience for every foreigner. The Tshechu lasts for three days and the final day is graced by His Majesty the King to offer prayers before the Thongdrol. The Tshechu is concluded with the unfurling of a huge Thongdrol which is supposedly almost two centuries old.

Today you will embark on Tiger’s Nest monastery hike. The Tiger’s Nest monastery is the most renowned attraction in the whole country. The spectacular structure is precariously suspended on an edge of a cliff at about 900m above Paro valley. Legend has it that in the 8th century Guru Rinpoche rode on the back of a flying tigress from eastern Bhutan to the current monastery site and meditated in a cave here for several years, hence the name, “Tiger’s Nest”. A hike of about 4 hours is the perfect way to end your trip. The hiking trail will take you through a diverse forest until you reach the monastery. After completing the demanding hike, you will be taken back to you hotel where you will take rest to wear off the fatigue from that arduous hike or perhaps choose to take a hot stone bath which often is deemed as the perfect way to unwind. 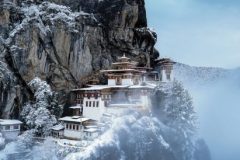 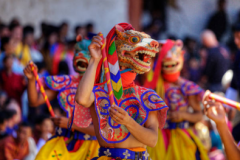 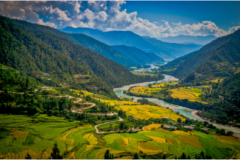 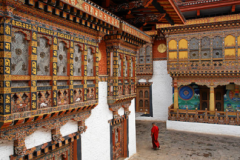 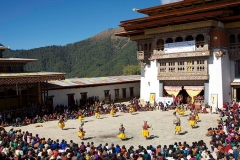 Phone or email us with any questions, we’re here to help.

Phone or email us with any questions, we’re here to help.